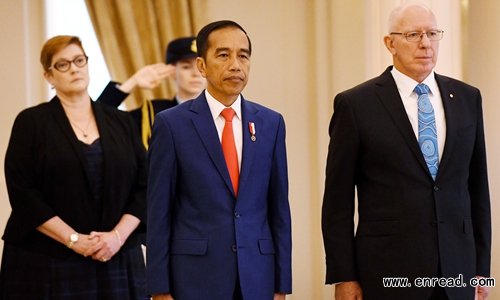 The two counties hope to deepen trade currently worth a modest $12 billion a year.

Widodo said his visit to Australia marked "a new beginning of a new relationship" between the two nations.

The 58-year-old former furniture manufacturer was sworn in for a second term late last year, promising2 to reduce widespread poverty as Indonesia becomes one of the world's largest economies.

Negotiations3 over the Australia­-Indonesia trade deal ­began in 2010 and it was ratified4 by Indonesia's parliament last week.

The agreement will eventually see the elimination5 of all Australian trade tariffs6, while 94 percent of Indonesian duties will be gradually ­eliminated.